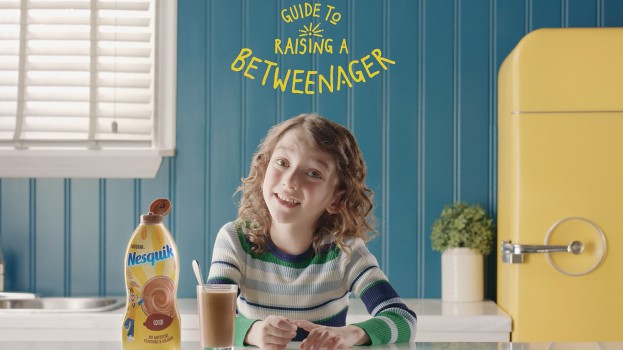 NEW CAMPAIGN FOR NESQUIK CELEBRATES THE AWKWARD LIFE OF ‘BETWEENAGERS’

This week, our new work introducing NESQUIK’S new and improved syrups and powders launched across Canada. The campaign reaches out to today’s parents of ‘Betweenagers’ to reconnect families with NESQUIK. We sat down with two of the brains behind the campaign, VP of Strategy Josh Hansen and Associate Creative Director Bill Schaefer, to talk about the work.

Q: First thing’s first. Who qualifies as a ‘Betweenager’?
A: (Josh) It’s that age between 6 and 13 when a kid is stuck between being a toddler and a teen. When kids are too old for the little-kid-things they grew up with – and too young for everything else. When nothing is made just for them, and independence is just slightly out of reach.

Q: How did you make the link between NESQUIK and Betweenagers?
A: (Josh) The brief was about getting today’s parents reacquainted with a brand that they remembered, but one that had lost relevance for them over the years. When we dug into the project, we recognized that, while parenting has evolved over the seventy years NESQUIK has been around, one thing has stayed true: NESQUIK is one of the first things kids make for themselves – it’s a first step towards feeling like a big kid. The creative team brilliantly married that product truth with the insight around this period in a kid’s life – and then magic ensued.

Q: As a creative, what inspired you about this brief?
A: (Bill) I loved the tension between nostalgia and modern parenting/childhood. It was creatively inspiring to see that, as much as the world has changed, some things will always be the same – like the absolute awkwardness of being a kid.

Q: What do you remember about being a Betweenager in your own youth?
A: (Bill) A specific Betweenager memory I have is the day we donated many of my action figures and toys and thinking to myself, “ok – what now?”

Q: How was it working with the Betweenagers on-set?
A: (Bill) Some kids were just natural stars who soaked up the spotlight, others were awkward and shy. Funny enough, being a bit camera shy actually benefited the campaign as it added a level of sincerity and realness to the performances.

Q: What do you love most about this work?
A: (Josh) The unique lens it gives parents of kids this age. The ‘in-between’ness of it all is special: it’s watching your kids grow up and start to have their own interpretation of the world. That independence is both melancholic and endearing – and the team captured it wonderfully.

Q. Final question… did you drink NESQUIK as a kid?
A: (Bill) Growing up, NESQUIK was always in the cupboard. Thinking back, I’m sure it was just a chance for my parents to keep me quiet for a few minutes.

Read more about the campaign here.